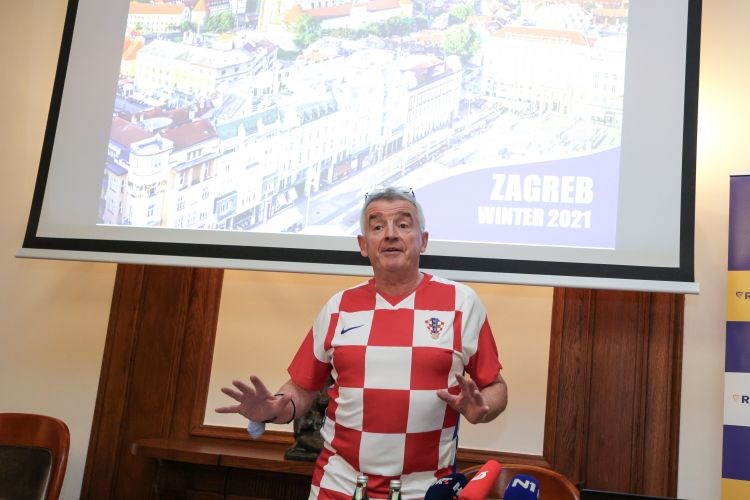 The low-cost airline Ryanair will operate 24 flights between Zagreb and European destinations in 16 countries as part of its winter timetable, and in December its Zagreb base will introduce a third aircraft, expecting around one million passengers by summer 2022, CEO Michael O'Leary said on Tuesday.

O'Leary, who was visiting Zagreb, told a news conference that the airline's winter timetable, to be introduced at the end of October, was Ryanair's first ever winter timetable in Zagreb.

He said that the company considered Zagreb a big challenge and saw great potential in it as well as in the entire Croatia, already recognised internationally for its tourism.

He noted that Zagreb was an increasingly popular city break destination.

Zagreb deserves to have at least 3.5 million air passengers annually, being the capital city, O'Leary said, expressing the belief that Ryanair would reach those figures in cooperation with Zagreb Airport.

O'Leary recalled that investments in Zagreb would help create 100 jobs and an additional 750 indirect ones in Croatia, noting that the airline could have three to five aircraft based in Zagreb.

He noted that as of next spring the airline would also fly to Rijeka but that it would stay over the winter only in Zagreb, with other flights being seasonal.

He expressed satisfaction with business cooperation with Zagreb and Croatia so far, expecting the continuation of strong demand for Ryanair flights and the number of passengers to increase to around seven million in the next three years.